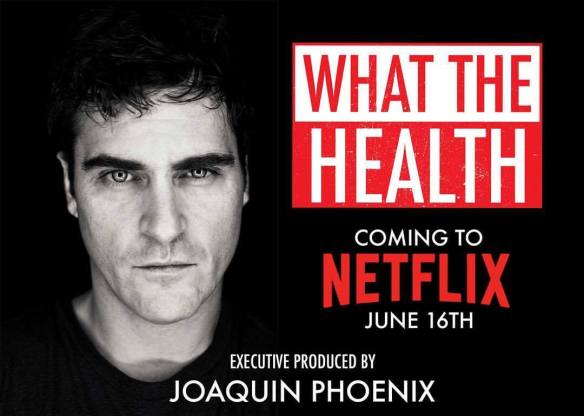 A few weeks ago, I watched the documentary What the Health on Netflix. I really only watched about 20 minutes of it, but that’s all I needed to form an opinion and write about it here. This documentary was created to inform us that everything we are currently eating is cancer, unless you are a full-Vegan (or plant-based vegan).

What I learned from watching about 20 minutes of this doc is that there are two types of people in this world, (1) those who get cancer, and (2) those who die before they realize they’ve got cancer.

According to the doc the animals we eat are filled with tons of carcinogens inside of their bodies, which is why every week on Facebook there’s a new article posted by some dum dum, that says “[This type of meat] gives you cancer!”

I gave the Plant-based, full-Vegan diet a thought, but then realized that I can’t take meat, fish, dairy and all of the other delicious things out of my life. I love pizza, tacos and Pretzel M&M’s! They did mention in the doc that human’s are the only animals that drink other animal’s milk, which when you say it like that it does sound kind of weird. We drink everyone’s milk: cow’s milk, goat’s milk, almond’s milk, coconut’s milk, soy’s milk and so many others. Most of these don’t even sound like actual milk.

The health industry is kind of like that book or movie where the mom is feeding all the kids just a little bit of poison, so she can take care of them while their sick, because it makes her feel better. I think that’s a book or movie I’ve seen. If anyone knows the name please let me know in the comments. Maybe it was an episode of Dexter, or just part of the plot of Crimson Peak?

The reasoning behind all the animals having cancer in their bodies is because the animals are breathing in smoke and pollution from nearby factories. Guess what, What The Health, we are breathing in that same air, so we already have the cancer inside of us. If that’s the case, I’m going to continue eating my normal diet, but I may add some Plant-based meals here and there. And if I do it’s because I want to, and not because you told me to!

I don’t think I will ever finish watching the rest of the documentary because I already got what I needed out of it (this 500 word Learning). So thank you, What the Health. Now it’s time to go back to Life in Pieces and GLOW on Netflix.

*If you have any Netflix recommendations please comment below, that or if you know the movie or book I was talking about. Was it Misery?

**One more thing, I was going to talk about Joaquin Phoenix and his last documentary (or Mock-umentary, I’m Still Here), where he tricked us all in to believing that he had gone off the rails. Also, I am no scientist, doctor or food specialist, this is all based on my opinions after watching just 20 minutes of this documentary.

1 thought on “What the Health?”