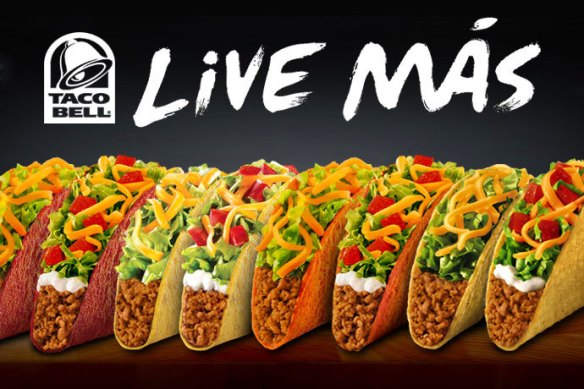 Last night, I ate Taco Bell for the first time in maybe 3-5 years. And let me tell you that Taco Bell is still as awesome as I remember, except it’s better now. Lately, the only fast food I’ve been eating is Burger King. Anytime it’s Thursday and I get out of Improv class at 10PM and I’m starving, but don’t feel like going to Publix to get something I have to cook, I always end up at the Burger King drive-thru. Which was getting to the point that I had to stop myself and say, “No more BK!”

I’ve been dying to go to Taco Bell since they released that Naked Chicken Taco, but the bad news is that it’s already gone. Every time I drove by a TB, I would think of stopping, but then I would think to myself, Wait, will this meal even make it back to Key Biscayne without getting all sogged up and ruined? Because I usually don’t like to eat food in the car, I would rather eat it once I get home watching my recorded TV programs.

Last night I wasn’t even that hungry. I just had a weird day and felt that it was time for some TB. I arrived to an empty drive thru, with no cars in front of me and no time to read over the new, super massive menu. The voice in the box instantly asked, “What would you like,” and I replied with a long, “Uhhhhhhhhhh…,” as I quickly sifted through all the new additions to the menu.

I remember when the menu was so simple, there were some tacos, burritos, quesadillas, chalupas and a few other things. Since my last visit they’ve added a bunch of hybrid items like “quesa-ritos,” “double-dillas” and so much more.

When I was younger my order was very simple, “Three taco meal, soft, only beef and cheese and a chicken quesadilla.” Today, that would be too plain and boring, I needed to try something new, especially after 3-5 years of not visiting TB.

I decided I’d ask for three things and three things only, but what would those three things be? I first decided on a Cool Ranch Doritos Locos Taco, only beef and cheese. Cool Ranch Doritos have forever and always been my favorite Doritos, the purple Spicy Chili comes in a close second now, but never Nacho Cheese. The taco shell wasn’t overly Cool Ranch-y, but it still had enough of that flavor that I was happy with it.

For my second item I asked for a Quesarito, not knowing exactly what it was. I went with the spicy beef. I’m pretty sure there was cheese, beef, rice, sour cream and maybe some other stuff in there. It was mighty good. I guess it was a burrito with extra cheese that was put on the plancha like a quesadilla. Whatever it was I was satisfied with it.

My third and final item was the Cheesy Stuffed Gordita (or Cheesy Stuffed Gordita Supreme), with beef and no lettuce. I’m not sure which one I got, because I first asked for the Supreme and the guy said it didn’t exist, although I did read it somewhere on that giant menu. This was also delicious, although I waited too long to eat it and the crunchiness of the taco inside the Gordita was not as crunchy as I would have liked.

Why did I choose these three items? The Doritos Locos was always on my mind from the moment I first arrived and saw they had a Cool Ranch version (I thought that was an LTO, limited time offer, #FastFoodTalk). The other two were crunch time decisions. I was panicked by the voice in the box and felt I was put on the spot and had to order before an imaginary shot clock ran out. So, I quickly looked through the menu and said whatever items caught my attention. I also didn’t want to start asking questions about each item, “Now the quesarito, what is that all about?” And have to listen to this guy’s explanations of each item.

Knowing what I know now, about the super massive menu at Taco Bell I will definitely do my research before going back. I may study the menu to be prepared for my next visit. Maybe I’ll print it out and highlight some items that I am curious about. Either way, I will definitely be visiting TB some time in the near future (I’m not waiting another 3-5 years), and when I do visit I will be prepared.

What are some of your favorite Taco Bell items? (tell me by commenting below, and if you think you’re too good for Taco Bell, keep that sh*t to yourself…)