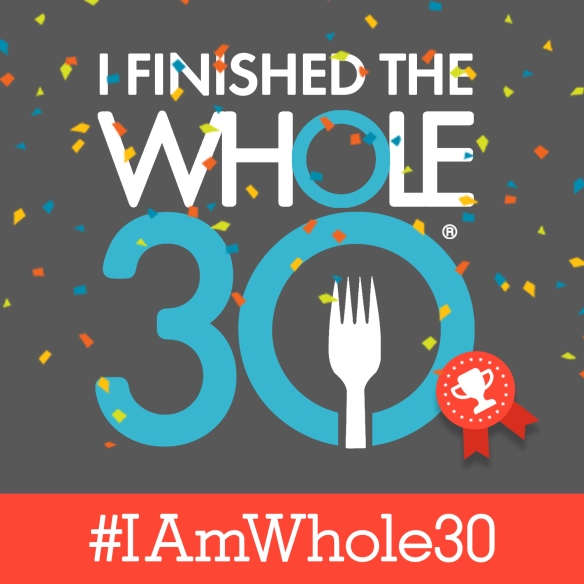 Last month, I took part in the Whole30. Many of you already know this because I posted everything I ate during the Whole30 online. If you didn’t know or have no idea what the Whole30 is here is my short description.

Whole30 = No added sugars in your diet. You eat meat, fish or eggs for protein. A whole bunch of veggies. Also, some fruits for natural sugars. Nuts, oils, ghee and other natural fats. Every meal should consist of these things. (No dairy, legumes, grains or non-gluten grains included).

After thirty days I had lost about fifteen pounds. The problem was once I finished my Whole30 I did one week (instead of two weeks) of reintroducing non-compliant foods: Beans/Legumes, Corn/Non-Gluten Grains, Dairy and Gluten/Grains. After that I went full rage mode and ate all the things I wasn’t able to eat during the Whole30: Pizza (twice), Burgers, Ice Cream, Cake, Cookies, Chips, Cheese, Tacos and everything else. I think I re-gained about five of those fifteen pounds. (It is now two weeks later, and I’ve slowed down on full rage mode. I weighed myself and was back where I was on Day 30).

Now, I’m hoping to find a healthy balance of Whole30-ish eating and my regular diet. The point of Whole30 is to eat using basic ingredients to reset your body, next you reintroduce the “non-compliant” foods to see how they affect you. You are basically turning your body into a walking science experiment (Whole30 made me a scientist!). Once you’re done, you may continue to eat whatever foods make you feel good, but no one is perfect so you also eat the foods that don’t make you feel good from time to time.

So, what did I learn during my Whole30?

Melissa Hartwig, creator of Whole30, talks about our “Sugar Dragon” a whole lot in her books and on her website. The “Sugar Dragon” is basically when you eat something sugary, your brain wants more and more sugar until there is nothing left in the house. It’s a whirling dervish of sugary delights.

I was extremely strict and faithful to Whole30, not eating any added sugar during the month of April. All the sugar in my diet came from fruits, and I didn’t have many cravings other than “Sugar Nightmares” (on a few nights I dreamt that I was eating sweet treats and other non-compliant foods. In one of my “Sugar Nightmares” I ate a whole pizza from Papa Johns). However, once April was over and I did finally eat sugar I went back to full-rage mode a few times. But since then I’ve calmed down a bit.

Once I eat one Oreo cookie, the rest of the Oreo cookies aren’t safe. I will eat all the Oreos I can find (or at least one row at a time). And once they are all gone I will move on to the next sugary treat until nothing remains. And that is why my SUGAR DRAGON is actually a SUGAR DEMON.

Some Whole30 habits you are encouraged to practice aren’t entirely diet related. In her Whole30 books, Melissa says don’t watch TV while eating. She wants you to enjoy each bite of your food. Eat slowly and kind of meditate while you eat. I do yoga and stretching for meditation and there are way too many TV shows on my list to not watch them while I eat. I even watched Ugly Delicious on Netflix (a pizza documentary with David Chang, while eating my Whole30 meals. I watched it three times in April).

Another Whole30 “rule” is no TV before bed. Before Whole30 I would leave my TV on until I fell asleep (That’s why the gods created sleep mode). This made it harder to fall asleep, and harder to wake up in the mornings. In the beginning of Whole30 I would even wake up with a headache, which I’m still not completely sure if that came from having the TV on at night or if it was my SUGAR DEMON telling me it needed sugar. One of Melissa’s tips is to read until you get tired. I started doing this most nights, and now I’m continuing that habit.

Reading before bed is like an even more natural form of Melatonin. I read until my eyes become heavy, then I turn off my lamp and fall asleep almost instantly. With the TV on it would take me much longer to fall asleep.

The main problem I had was not sleeping enough. I always try to do too much before bed, whether it’s writing, drawing, reading, watching shows or trying to beat God of War. I end up getting into bed at eleven or midnight even though I’m trying to wake up at six or six-thirty to write or run. One thing I need to get better at is going to sleep early when I want to wake up early.

Melissa talks about “Tiger Blood” a whole lot (It’s something Charlie Sheen said in that interview where everyone thought he was a crazy person. I think his “Tiger Blood” came from cocaine and drugs, but Melissa’s version is when you’re eating super healthy so you feel awesome in your mind, body and soul). I don’t think I ever fully felt the effects of “Tiger Blood” and that’s probably because I didn’t sleep enough.

I did have way more energy throughout the day while eating Whole30. Before this I would eat sandwiches and bread-y things for lunch which would make me want to lay down after work. With Whole30 meals I would get home with enough energy for boxing, yoga, stretching, biking or some other activity.

[4] EVERYTHING HAS SUGAR IN IT.

During April I learned that everything has sugar in it. Every sauce, every frozen meal and most things you would order at a restaurant have some form of sugar or fake sugar in them. That’s why I had to cook about 98% of my meals from scratch, which I don’t really mind, because I enjoy cooking.

Even my Ice Breaker mints (and pretty much every type of mint or gum) were non-compliant with the Whole30, because they have some kind of “science sugar” in them. (A “science sugar” is something that’s made in a lab to sweeten foods without adding calories so people think it’s healthy. Coke Zero is full of science sugars that haven’t yet been discovered, and also probably contain tons of cancer and other diseases which we will find out about in the year 2020).

Thrive Market was a good place to find special Whole30 versions of sauces (Just make sure to cancel your subscription before you get charged the insane monthly fee. Also, they are real annoying about letting anyone cancel their membership. I had to chat with some dude who kept trying to throw in another free month, until I finally told him, JUST CANCEL IT MAN!).

It took me until week two to finally find a bacon with no added sugar. I had to go to Whole Foods in Downtown just to find some bacon. Early on, I found Prosciutto, Jamon Serrano and some other Italian and Spanish deli meats with no sugar or other non-compliant ingredients. The trick is to find deli meats that say, “ingredients: pork, sea salt.”

[5] FRUITS TASTE BETTER WHEN YOUR SUGAR DRAGON/DEMON IS ASLEEP.

In the Whole30 books I read that my taste buds would change from not being overwhelmed by all these sugary and processed foods. This is true and I know this because before the Whole30 I couldn’t eat a whole orange. The flavor was too strong and I could only handle about one slice. But now I love oranges, grapefruits, kiwis and tons of fruits I’ve never even tried before (I had only tried the artificial versions or flavors of most fruits. The fruits in my diet used to come from Starburst and Skittles).

Before Whole30 all of my dessert and sweet choices were all made with chocolate, peanut butter, nutella and milky/sugary goodness. I hope I will try more fruity sweets (or just straight fruits as dessert). Even just cooking some apples and pears in ghee (or clarified butter) with some cinnamon is a delicious (and nutritious) treat.

If you are someone who had Whole30 questions for me, I hope this helped. These are just some of the things I learned during my Whole30. My next post will be my TOP 5 Whole30 DISHES (recipes included) for people who are on the Whole30 or those who would like to test drive some recipes before committing to the program.