Last week I went to the movies by myself for the first time in my (almost) 30 years of existence. Before last tuesday there was only one time that I even thought hard about going to the movies by myself — I was in Tallahassee and the documentary “It might get loud” came out (with Jack White, the Edge and Jimmy Page). I asked my friend who played guitar if she wanted to go with me one weekend. She got too drunk on Saturday and never woke up on Sunday (not really never, she woke up eventually). At around noon I decided I would go by myself, but I think I stayed home playing video games instead. I waited about a year to rent the movie on Netflix (pre-streaming) on disc.

There is a good reason why I ended up at the movies by myself last Tuesday. What had happened was I went to eat lunch with my friend in the grove. When I got back to my car, some idiot had parked in front of me where there was only about 3/4 of a parking spot. This dum-dum decided to back up all the way onto the hood of my car, real tight. I probably should have left a little more room behind me, but there was a fire hydrant behind that car, and I thought no one was dumb enough to try and park in front of me (but it’s Miami, and people who drive cars are that dumb).

I could have called the parking authorities to get the car towed, since they were partially sticking out over the curb and into a parking lot entrance. I thought that would be rude, even though this person was already a dick for parking in front of me, where there was no space. After waiting 10 minutes in my car, I decided to go to the stores that interested me in the grove. After visiting the two stores that interest me (Tervis & the surf shop) I came back and saw both cars still sandwiching mine in.

I continued walking past my car and visited the bookstore in the grove, but didn’t buy anything because I have way too many books to read already and not enough time to read them all. After about an hour of killing time at the bookstore I went back and both cars were still there. I called my boss (dad) to let him know that I was stuck in the grove, “maybe they went to the movies, who knows when they’ll be back,” he told me.

That’s when I decided I shouldn’t just sit around waiting, so I went to see what movies were playing right then. Sicario was starting in the next 10 minutes, so I bought a ticket for that. It’s weird that when the theater allows you to pick your own seat, it automatically chooses the one next to a stranger (maybe it was because I was only buying one ticket. It’s like the computer was saying, “Are you sure you don’t want to make a new friend?”). In the movie theater it was me (by myself) and one weird couple. A couple who probably went to the movies at 2pm on a weekday just to make out. Now, how strange it would have been if I bought the seat next to them, and sat there for 2 hours in a completely empty theater, “You guys want some popcorns?”.

The good thing about going to the movies by yourself is that you can buy all the snacks you want and none of your friends can judge you. You don’t have to share any of these snacks with anyone. I ate all the popcorn and drank all the soda. You can put the arm rests up if you want and just lay down or put your feet up. You can IMDB stuff during the movie without having to worry about bothering anyone with the light of your phone screen (even though I know people who play on their phone the whole movie, with the screen on the brightest setting. It’s very distracting, Rick!).

The bad part about going to the movies by yourself is that you’re by yourself. This is especially depressing when you walk into a theater to find one lonely couple. Also, if this couple just wants to make out and the girl doesn’t know how to whisper. It also sucks if you’re not paying attention and miss a line, you can’t ask your friend “What did he say?” (Even though whenever anyone asks me that I just say “Uh, I don’t know?”). Also, you have no one to provide commentary to about the stupid things that happen in the movie.

Will I ever go to see a movie by myself again? Probably not, unless I fall into this situation again or something similar. Movies by myself are better at home on the couch, on my chair or in my bed.

After the movie I returned to my car to find the dum-dum still parked in front of me. However, someone else had parked behind me. Someone who knows how to park, and left me enough room to leave.

This is what I left for the dum-dum, idiot face (in case you missed it because you don’t follow me on instagrams, twitters or anywhere… @ferdonkers). 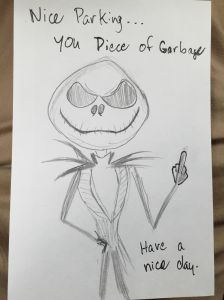