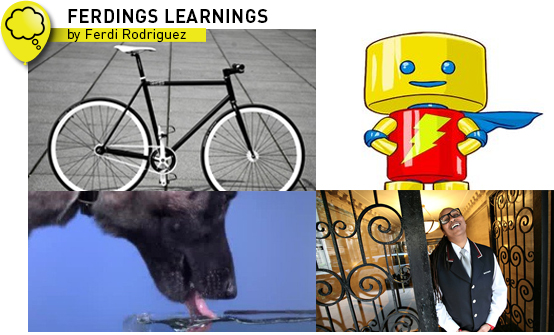 I call these “the lost learnings” because they are the things I have learned lately, but forgot to tell you about. Some of them I didn’t feel were important. Some were kind of stupid. Others I just forgot that I learned and have now been reminded of them (when I searched through my iPhone and iPad). So here comes a rapid fire short list of recent learnings:

–Fixies: I saw the movie Premium Rush recently, starring JGL (Joseph Gordon Levitt). In this movie he rides a fixie bike, with NO BRAKES! Some people say, “That’s stupid,” others say, “That’s Bad Ass!” I started off thinking it was Bad Ass, I did my research (online) to learn all about fixies, I was about to buy one, but I wasn’t ready (NO $$$). The other night I saw a good friend of mine from high school. I asked him about his bike, which looked like a fixie. He said “fixies are stupid” and he explained to me why. So, now I don’t think I want a fixie anymore (maybe a single speed or a roadie?)

–Florida SuperCON: This last weekend I went to Florida SuperCon, which is just a mini version of Comic Con that takes place in Miami (Comic Con is where nerds go to learn about nerd things). What I learned here is that there is now such thing as “sexy lady nerds.” I was expecting everyone there to be fat and smelly (well about 72% of the people there were fat and smelly). Of the 28% of people who weren’t fat and smelly, most of them were dressed as comic book people, movie characters or something I didn’t know about. Some were dressed in slutty halloween costumes (the nerd versions). It was really weird and awesome all at the same time. I can’t wait to one day go to a real San Diego Comic Con!

–Dogs Drinking: If you are ready to have your mind explode (from science) watch the video above. I was watching Time Warp videos one day at Razorfish (Time Warp is an awesome show from Discovery channel that shows you everything with slow motion cameras), and Sweet D told me to check this one out. How many of you thought that dogs drink water by making their tongue go up? WRONG! (Everyone thinks that, unless you seen this video, or are scientists). After seeing this video, not only was I amazed, but it made so much more sense. Have you ever tried to drink water like a dog, but the wrong way? Now try it like this (Tongue down) and see what happens.

–Doorwomen: In my building in New York we had a doorman, we actually had about 6 different doormen. Once you’re building has a doorman, or doormen you start to notice other buildings with doormen. One thing that I never saw in New York, a door woman.