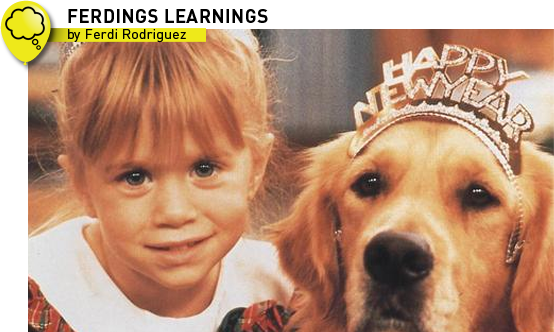 This week I learned that little Michelle Tanner, from the 90’s sitcom Full House, was actually played by not one, but both Olsen twins. I have so many questions now, hopefully Google has answers.

How many dogs did it take to play Comet throughout the years?

I was amazed to find out that Comet was only played by one dog, Buddy. However, it took two Olsens to play Michelle Tanner. Buddy was born in 1988 and died on February 11, 1998, due to cancer. Buddy still had a wonderful life, he was not only Comet on Full House for most of his life, he also played Air Bud in the first film, the good one.

Were Nicky and Alex actually played by twins, or did they need more than two of them?

Nicky and Alex were played by a set of twins, Blake and Dylan Tuomy-Wilhoit. They quit acting after Full House and just wanted to live a normal life. According to IMDb at least one of them graduated from high school in 2010, Blake. I’m sure their creepy TV uncle, Bob Saget, was an influence in their exit from acting.

Back to the main reason I started writing about Full House, Michelle Tanner and the Olsen twins. The Olsens were only chosen for the part of Michelle because they were the only set of twins who didn’t cry during auditions. So, all of these Fox Family Olsen twin TV movies were a result of holding in their tears during their Full House audition.

Another thing I wonder about is if the Olsen twins were paid less than the other actors. The two of them only played one character, it wouldn’t be fair for each of them to get the same amount of money as Uncle Jesse or Danny Tanner, who had to play their characters 100% of the time (I would imagine Lindsay Lohan got paid double for the Parent Trap). I guess it doesn’t really matter, since whatever money they did make went to their parents anyways.

Random Disclaimer: I actually knew that Michelle Tanner was played by both Olsens the whole time, but thanks to my research I learned a few new things. Thanks Google. Also, RIP Buddy aka Comet